Which Way Is Home?

by Turning Jewels Into Water 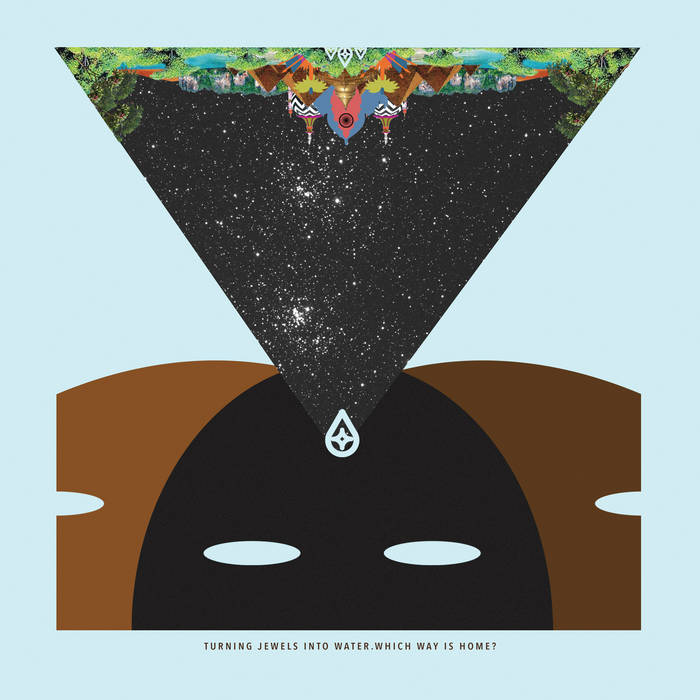 Turning Jewels Into Water, the deep-beat ceremonial think-tank that sees the coming together of percussionist/rhythm-prophet Ravish Momin and Haitian experimental electronic engineer Val Jeanty, are set to expose the contaminating realities of our dysfunctional, dystopian present with an infectious blast of Blade Runner-esque retro-future. Half-organic, half-machine, total binary breakdown; their incendiary debut release, Which Way Is Home?, plots an emphatically liberated path. We would do well to follow it.

The duo’s alliance was initiated in the fall of last year in Brooklyn, NY, during a jam session at Pioneer Works, the creative locus for prime multi-disciplinary misadventure, where Momin held down an artist-in-residence slot – but that pact has rapidly evolved into a honed ritual revelation, where disembodied voices rise up amid scattered rim-shots and digital detritus, territories formerly deciphered in the linguistic dreams of hip-priest poet Nathaniel Mackey, where Martian phantasms encrypt gnostic cyphers between the tributaries of burnt-down cabling.

Yes, spiritual resurgence resides at the bursting cyborg pulse of this craft: Momin sourcing Indian, North African and Middle-Eastern traditions, liberated artefacts from a childhood spent in Mumbai and Bahrain, as Jeanty draws on her native vodou, communicating in cosmic pulse and sine wave from behind the command centre of her turntables. They are the co-pilots of an enchanted émigré vessel, carrying a belly full of outcasts looking for new worlds, wishing away the past for a fresh beginning. The flight-deck console flickers intermittent messages, the mutant dub-thrum of Shackleton (and that whole Skull Disco vibe), Muslimgauze and Hieroglyphic Being filtering dense poly-rhythms through the static-punctuated intercom. This is Afro-Futurism recast as Afro-Electronica. Historical log checks and counter-referencing throws up reams of raw data, paper mills of heredity casting trails back to DJ Olive’s 90s Illbient scene and Momin’s own experiences with everyone from Shakira to venerated AACM alumni. Jazz’s exploratory lineage – from Ornette to Zorn to Matana Roberts – lives on in this music’s creative and open-minded expositions.

Dial into the 1980s amusement-arcade delta of ‘Lights Below The Water’, the post-apocalyptic synth and abused syntax sprawl of the title-cut and set your course for home, anyplace where the absurdist jungle-temples of Raymond Roussel and Brian Catling are being cultivated by the cyber-horrors of Shinya Tsukamoto’s Tetsuo and the mischief-making syntax-gremlins of Kenji Siratori’s Burroughsian novel Blood Electric. Which way’s home? Take a tumble through a telescope. Pick your own planet. Home can be anywhere you make it.

Bandcamp Daily  your guide to the world of Bandcamp