by Turning Jewels Into Water 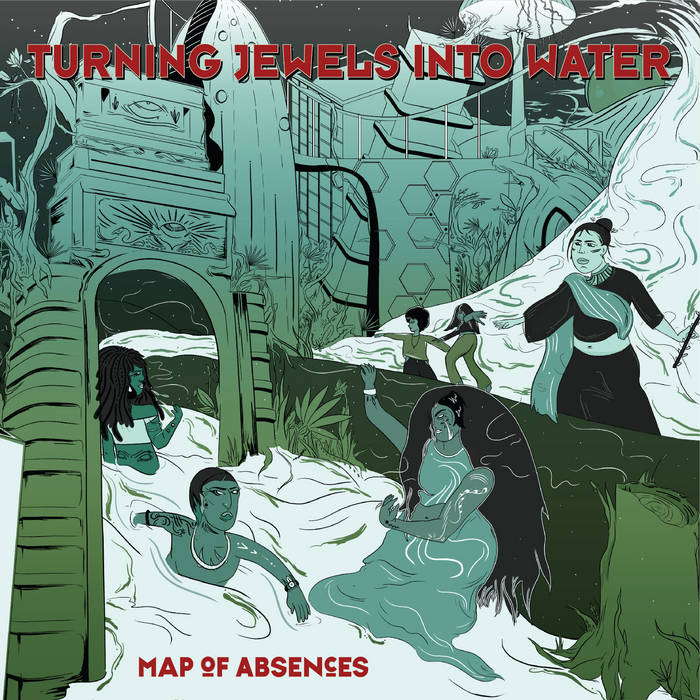 "Our full-length record, 'Map Of Absences' is a reflection on the regressive state of human rights, deepening refugee crises and the worsening impacts of climate change worldwide. Imagine a world where refugees of color are free to cross borders, LGBTIA people are treated fairly and respectfully, and environmental healing technologies are widespread. These ideas are unfortunately absent from our current reality. We say ‘absent’ instead of ‘forgotten’ as the latter implies an instance of memory or a record of those things having existed. Musically, we drew inspiration from artists such as DJ Lag, Nidia, DJ Rashad, Nihiloxica, and Epic B amongst our other varied global influences. For the album artwork we tapped Marissa Malik, a UK based artist whose work evokes the mystical and empowered mythical beings. For remixes, we returned to Kenyan maverick Slikback (Hakuna Kulala) and also approached PlayPlay (who ran the legendary “Party Illegal” in Durham NC for years) and the modular-synth wielding producer Nueve Vidas from Mexico City.”
--Turning Jewels Into Water

This new project with Val Jeanty arose from her participation in a jam session at Pioneer Works in Brooklyn, NY while Momin was artist-in-residence there in September of 2017. Their collaboration, rooted in improvisation, evokes the esoteric realms of the creative subconscious. Drawing from the voodoo religion, Val recreates the ancient rhythm and pulse of Haiti through digital beats, while Momin, whose own musical background is rooted Indian, North African and Middle-Eastern traditions, has developed an original blend of electro-acoustic beats, drawing together the improvisational traditions in Jazz and Indian folk music. Together, they employ cutting-edge music-technological tools such as acoustic drums outfitted with Sensory Percussion triggers, Force Sensing Resistor (FSR) drum pads and Smart Fabric MIDI Controllers, but still emphasize the ritual aspects of creating music in the digital realm.

Their unique sounds quickly caught the interest of music curators and in 2018 they performed at the Bang On A Can Marathon (NYC), ZEZ Festival (Croatia), Tarcento Jazz Festival (Italy) and various venues in Slovenia, Slovakia, Czech Republic, Switzerland and Italy. They closed out the year with a two-day run in Washington DC where they performed at the Flash of the Spirt Festival at Georgetown University and the Anacostia Arts Center. They released a critically-acclaimed EP on FPE Records entitled “Which Way is Home”, which featured remixes from rising-stars Slikback and Zilla, both of whom came heartily recommended by the crew that operates the Kampala, Uganda-based Nyege Nyege Tapes record label.

We’d also like to give a shout-out to Larisa Mann, FPE Records, Marissa Malik, Bizonton 53 Haiti, and to all our supporters worldwide!

**This album is dedicated to those fleeing atrocities, those fighting persecution, and those bearing the impact of climate change, yet continuing to resist and persist.**

Bandcamp Daily  your guide to the world of Bandcamp